Hawick Quins RFC enjoyed the most successful season in their history last time around and has been working hard to make sure that they are well prepared for the new campaign. Rugby Club Magazine recently caught up with Club Representative Craig Richardson to find out more.

He told us, “I have been involved with Hawick Quins now for eleven years and was first involved when I was eighteen years old, moving up from U18s rugby. I was pulled into the then current Quins Presidents office in our local pub ‘Jock Reids’ and was quizzed about where I was moving on to play senior rugby. Up until that point I hadn’t given it much thought but Phil Nichol sold me it on the fact that the Quins are a fun, enjoyable and social club with a great bunch of boys, which it is!”

“Back in preseason in 2014 I suffered a ruptured ACL and in 2015 had it reconstructed. I loved playing but had given up on the realistic chance of being able to recover to play again and took up the role of team manager. However, when struggling for front row one week in 2016 I jumped straight in with both feet when given the chance to play again and ever since then I’ve been juggling the duties of team manager and playing and training every week.

It’s a tough mission some weeks when your mind is focussed on trying to drag boys to training and trying to raise a team and finding a balance between getting the manager job out of my head and switching to game day mode is quite a challenge. However it’s a challenge I enjoy and this seasons success as BT East League 1 winners and BT Shield Runners Up makes it all the more worthwhile.”

“At the moment the club is on a massive high. It’s been the most successful season in our history and most importantly, we are a group of close friends doing the thing we love. Winning has played a massive part in the high spirits but it’s really down to the camaraderie in the squad.” 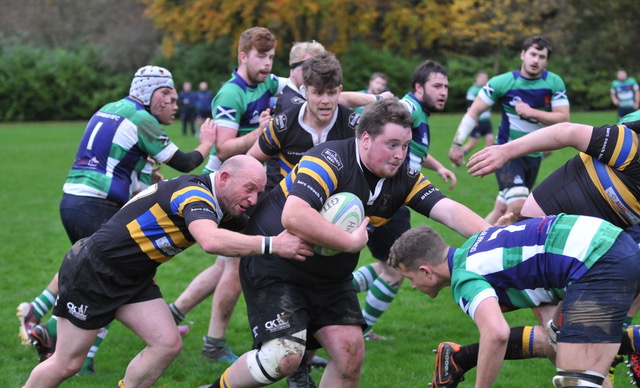 “As mentioned before, this season has been the most successful the Quins has ever had. We won East League 1 for the very first time by a wide margin, winning 18 out of 19 league games, losing only once.

We also made it to Silver Saturday at BT Murrayfield in the BT Shield Final where we finished runners up to Carrick, now three times winners of the Shield. But the experience of getting to the Shield Final was just as good as what the win would have been. We set our targets at the beginning of the season and that was to be league winners and get to the shield final, and to say after nine months of hard work you achieved your goals is pretty impressive.”

“During the off season our plan is the same as always, attract new blood to the club. Hawick has a very different rugby culture to the rest of the country, a town of 16,000 people (roughly) and four adult rugby teams with only two U18 feeder teams. The battle for young talent is always tough so targeting players who have drifted away from the game and trying to encourage them back is going to be another focal point this summer. For the 2018/19 season our main plan is club sustainability. If we can get a few extra lads then we can continue to grow and hopefully push for another successful year in both the league and shield.”

“Youth rugby is important to every club. But as explained in the previous answer, our club doesn’t have its own youth set up. Youth rugby in Hawick is run by their own committee and coaching set up and is kept separate from the four senior clubs in the town. Youth development is still very important to the Quins and we hold an annual 10’s tournament for the six local primary schools, we set up pitches, ref’s and catering along with supplying medal’s for all players on the day.

Each season we send out letters to the young players moving to senior rugby inviting them to the club to play the following season along with an invite as a guest to our club dinner. We offer discounted subs and discounts on club merchandise. This season we have also invited them to come along to training as we train on different nights to the youth.”

“I think we would consider our club to be a community club. We try our best as a club to do our bit for the local community. We hold various functions in the club, do sponsored walks for local charities and various other things throughout the year.”

“The clubs biggest challenge in the coming years is ultimately going to be survival. With player numbers across the country on the down we are no different in that fact. With the youth of today having many different interests finding boys who want to play any sport, not only rugby is hard enough.

Financial difficulty could be another strain our club, with dwindling membership renewals and sponsorships harder and harder to find and footfall in the clubrooms on the decline money can only be stretched so far. With the growing cost of travel expenses budgets are being tested each season.”

“First and foremost our ambition is survival. Secondly, we wish to remain competitive in our current league and repeating this season’s achievements would be an ideal goal. Thirdly, we wish to continue in our player development, last season Scott Peffers played in the centre for us and this season he made the jump into Premiership One rugby with Glasgow Hawks and has had regular appearances at 15 or on the wing and he recently played in the do or die play-off game against Jed where he started at 15.”