Langholm Rugby Club has a proud history and continues to play a vital role in their community to this day. Rugby Club Magazine recently caught up with their Chairman Kenneth Pool to find out more about how they have been getting along lately.

He told us, “I have been involved at Langholm RFC since 1976. Langholm RFC has been in existence since 1871, being the first club in Scotland outside the city schools clubs to be formed. We have always been a huge part of the community so it was quite natural to get involved as a player, committee man, president and now chairman. The club is part of the fabric of the town.”

“Everybody at the club including myself is an unpaid volunteer and all the senior officials who run Langholm RFC have full time jobs so it can be challenging making sure that the main business of the club is carried out effectively and on time. We need to make sure the interests of senior players and players at all  youth age groups are looked after, maintenance of facilities is carried out, social events are organised and everything that makes the club run is being looked after.

However, it is rewarding as we have a great management team and committee who work hard to make sure that the club runs well and this makes the role of chairman much easier. At the last count we had over 80 volunteers working at the club, doing everything from making the teas, lining the pitch, sweeping the changing rooms to helping on the bar and managing the senior squad. They are a great bunch with the club at their heart.” 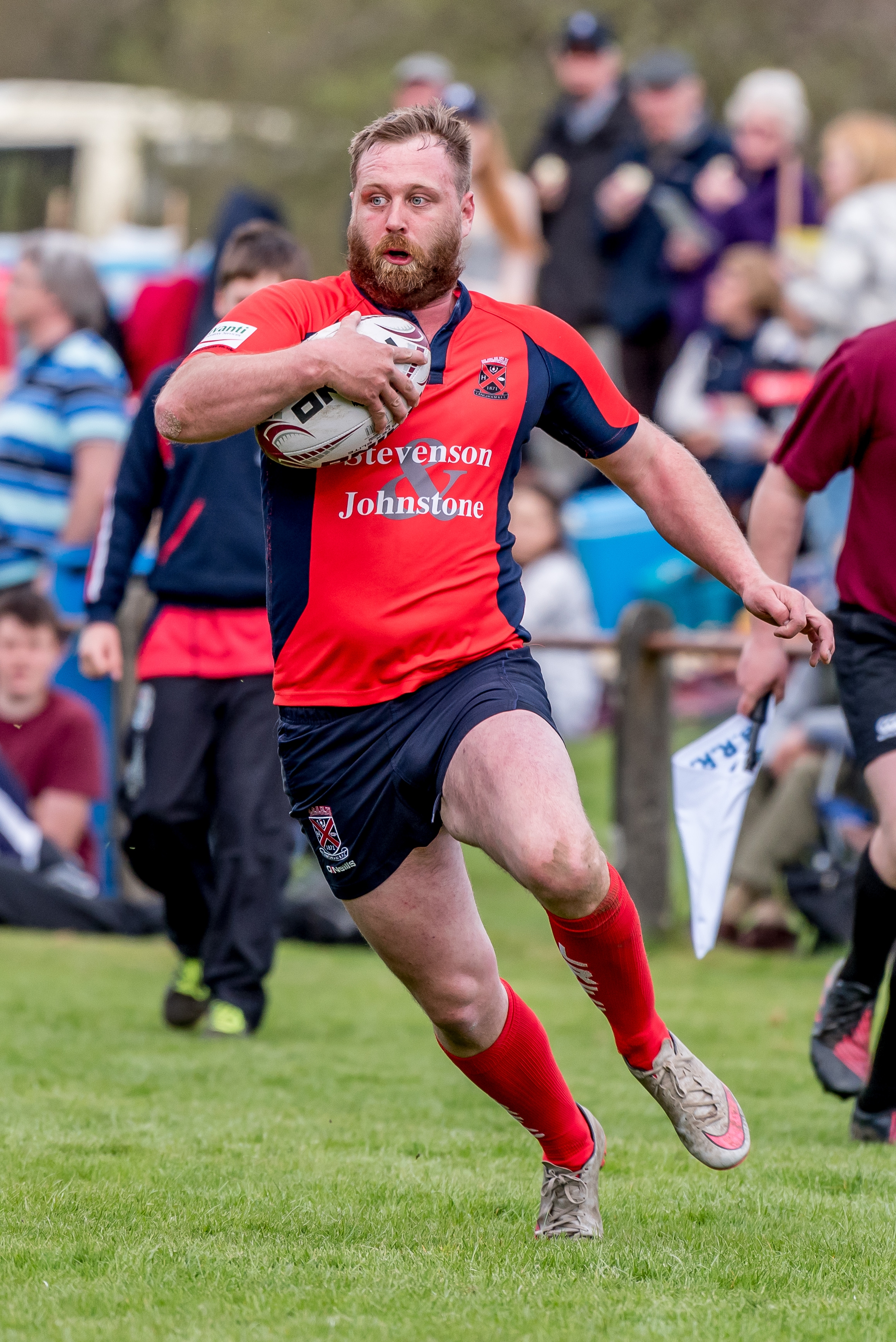 “The mood here is very positive; we had a good season in East League 2,  winning 14 out of 18 matches and finishing 4th in the league. Player numbers will always be tight due to the small population of the town (2300) but we managed to turn out full squads for all league matches up to the end of March. Club facilities are constantly being improved, Member numbers are up, we had an excellent Sevens  back in April, won by Watsonians, which was very good financially and we are currently having work carried out to the main pitch to improve drainage. Our youth section continues to flourish and the local 3G pitch is being fitted out by the club so that youth matches can be played later in the year.”

“Under new coach Craig Hislop, the season went well and we were in contention for promotion for much of the season. However the bad weather in late February and March caused a  lot of disruption to matches  and we had to settle for 4th place ,

We have new sponsors for playing and training gear on board for the senior side and good support from a number of local trusts  for the Youth rugby club so we are all set for the new season and the challenges that will bring , but we are optimistic and looking forward to getting stuck in.”

“Youth development is very important to us; our Youth rugby is flourishing with over 100 players of both genders from ages 7-18. We were one of the first clubs in Scotland to be awarded a Positive Coaching Scotland accreditation due to our inclusive youth policy. The clubs Youth rugby Steering group make sure that every opportunity is taken to encourage young players playing both at the school and as the club.

We have had considerable success with various age groups over the past three years with our U16 and 18s being Dumfries and Galloway schools champions and Sevens champions and our U15s Girls squad doing well in the D & G schools sevens.”

“The policy of the club is to develop our own young talent to step up to the senior team and over the past three years the work undertaken by the youth rugby club has seen this come to pass with a number of young exciting players now playing senior rugby. We make sure that we provide playing opportunities for both genders in an atmosphere that is enjoyable, friendly, welcoming and respectful.

This helps to encourage youngsters to keep playing at each age group up to age 18. We all know that the drop off of players aged 16-18 is high across the country  so we have a  joint project with Hawick Youth rugby to make sure that our 16-18 year olds can keep playing at a good standard by sharing players  to ensure full squads are available on a Saturday. When they turn 18 they are welcomed back to play for the senior Langholm side.”

“We are absolutely a community club. As said previously, we have been part of the tradition of the town for almost 150 years. We make our facilities, pitches, club rooms etc. available for all sorts of other community groups from the WRI, the local football team to big ventures like the Muckleton Adventure festival with its hundreds of runners, mountain bikers and road cyclists using the rugby club as its base. We are keen to develop the club facilities further as a community hub.”

“Due to the small population and lack of jobs in the town, many potential players are going away to college and can be lost not just to the club but also to rugby. Others have often to work on some Saturdays and can’t play on those days. Player numbers, particularly front row players, will always be a challenge but we have faced these issues for a number of years and are determined to overcome them.

The club will celebrate  150  years as a club in 2021 – our ambition is to celebrate that anniversary as  a successful , vibrant and forward looking club that is inclusive for all.”