Following a Bridgend Youth Tour in March 1972, team spirit was so high that so as not to go their separate ways into senior rugby, the idea arose to form their own senior club. A Bridgend Athletic side had existed up until 1939 and now the reformation process was to begin.

The early years following reformation saw many troughs including the loss of a ground for two years. Despite the setbacks, the ambitious committee continued to develop the club, lay the foundations of an energetic youth policy that continues today, and decided that independence was required. The youth team was formed in season 1975-76. One of its players, John Apsee, who went on to play for Wales B is now the Senior Team’s Head Coach. The late Barrie Morris had a major influence on the rugby and administration of the club in its rise through the leagues. 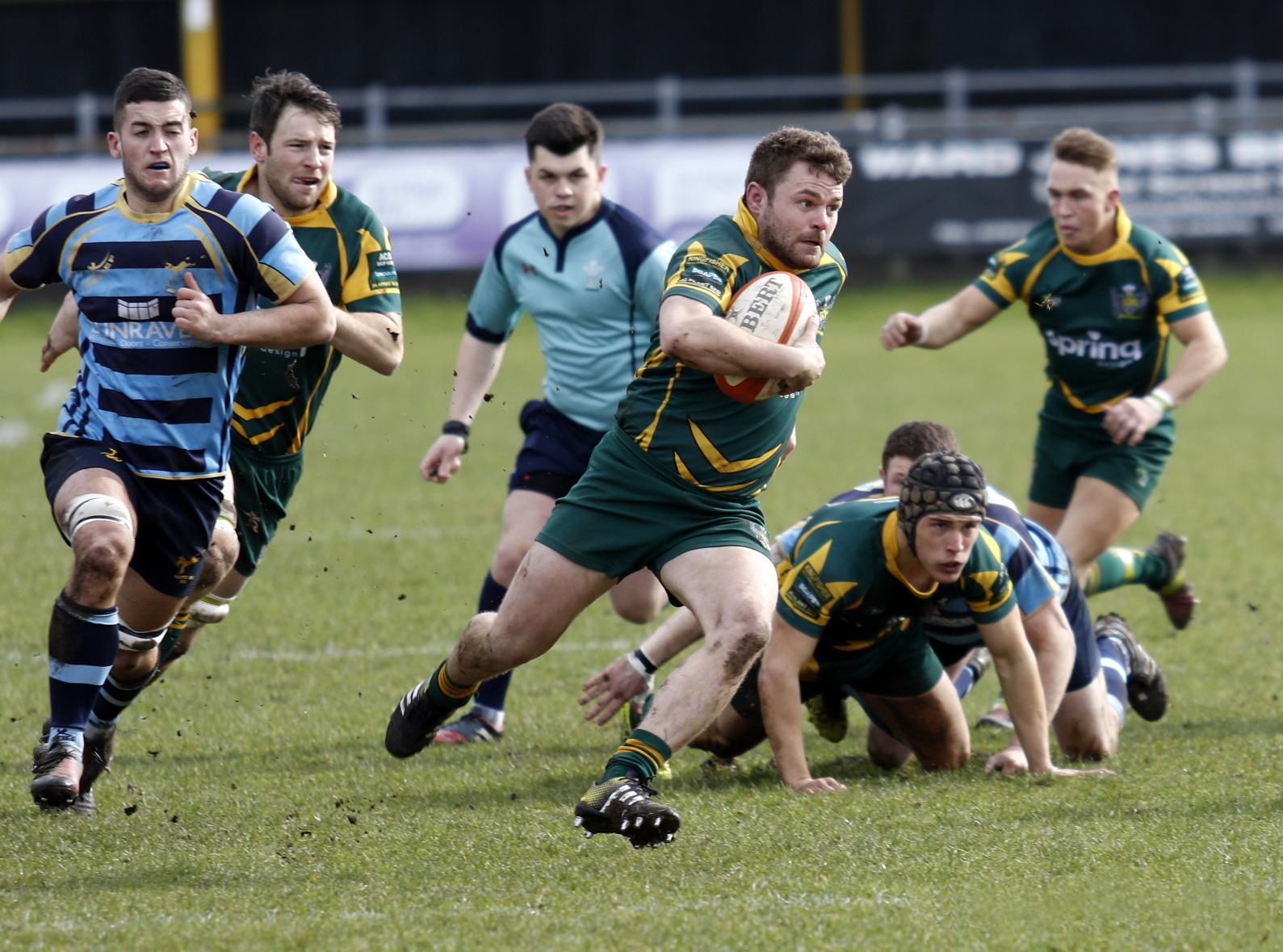 As always, fortune favoured the brave. The legendary Dr Jack Matthews officially opened the current Ewenny Road clubhouse, purchased from the WEXA and following major refurbishment by players and club members alike, in September 1982. This was a nostalgic event for Dr Matthews as the building was his family home during the time he was a record breaking athlete at Bridgend Grammar school. This before he joined Cardiff to become one of the most famous Welsh Internationals and British Lions of all time.

In 1983/84 the club was admitted to full membership of the Welsh Rugby Union.

A mini/junior section was formed in 1989 and has developed over the years into a thriving and successful section of the club. These days over 250 youngsters in all age groups from U7 – U16 play on a Sunday morning, proudly wearing the green and gold of the Athletic.

The dedication and commitment provided by the organisers of age grade rugby, including the quality of qualified coaches, first aiders and referees is impressive. The standard of mini/junior rugby at the Athletic is recognised throughout Wales and the British Isles and is reflected in the number of tournament invites and wins. 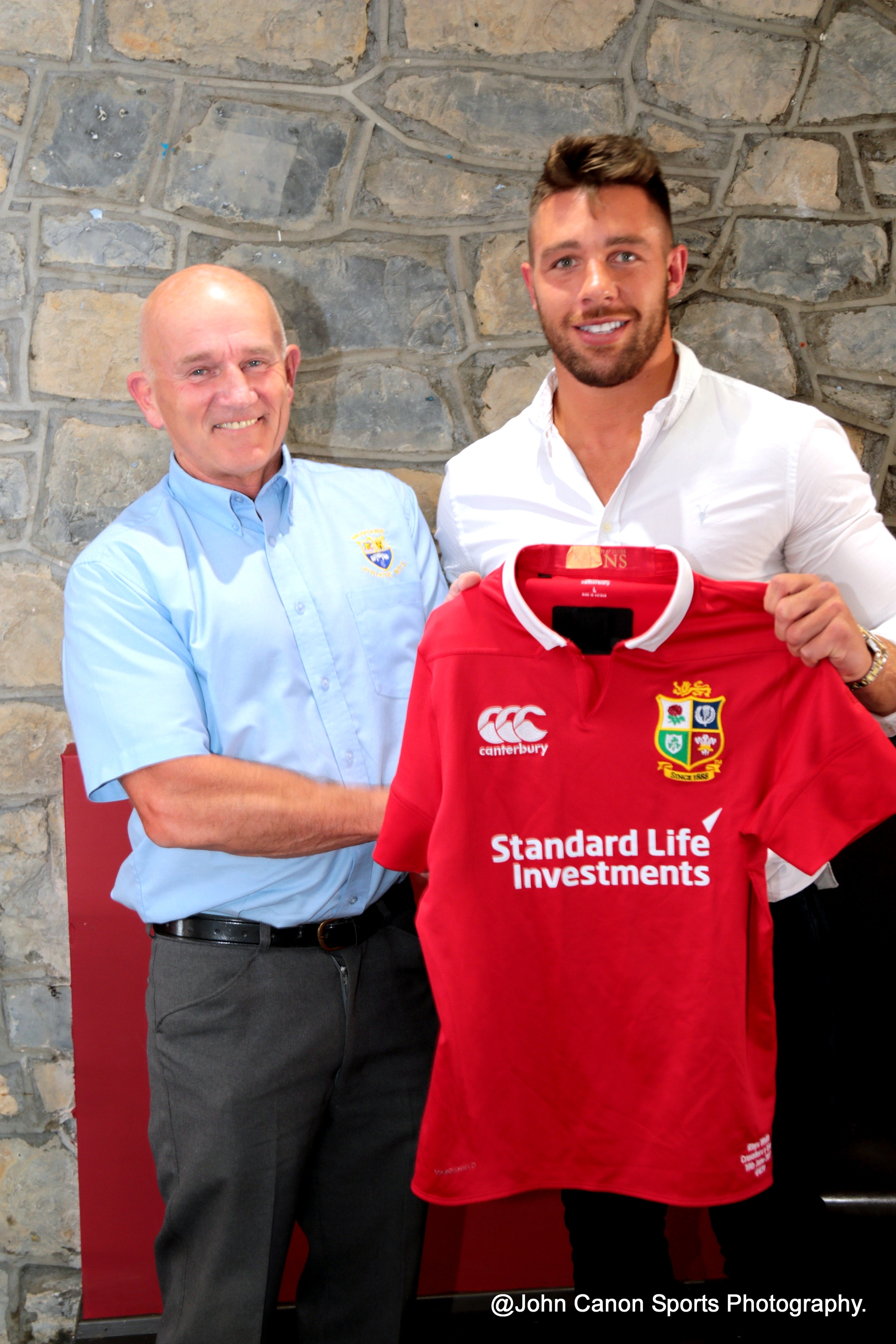 Most of the club’s senior squad have progressed through Junior and Youth rugby at the Athletic; many started playing rugby at under 8 level and have played at all age levels up to Senior rugby. These include our most famous players, Wales & British Lions Rhys Webb and Lee Byrne, who have never forgotten their roots and regularly attend presentation nights and other club events. Rhys’ son Regan played in this season’s Under 7 age group.

This season’s Annual Mini Festival attracted World Cup referee Nigel Owens to referee some games and exchange banter with Rhys who also refereed at the tournament. When Rhys asked Nigel for some tips Nigel countered that Rhys always appeared to know everything about refereeing whenever he officiated him.

This season, fielding seven of last season’s National League Youth Championship side they finished in 3rd place in Division 1 West Central scoring 604 points and 80 tries in 22 league games. After losing 3 of the first 4 games they won 16 of the remaining 18, including a six-month 14 match winning sequence. They recorded six league doubles, defeating every side except for champions Maesteg Quins.

They are coached by three former Athletic players, Head Coach John Apsee, backs coach Stuart Morris and forwards coach David Williams. Former Wales scrum half Gerald Williams has come on board this season. Paul Hearne has been Team Manager since 2008. Stuart Morris, an eight times club captain is the Athletics’ all time senior appearance record holder with 458, top points scorer (3977) and most points in a season (393) record holder.

Former hooker Simon Mustoe, the youngest club captain at 21, made 307 appearances. Current prop Wayne Fooks has made 356 appearances, while No 8 Sean Williams a 5-time club captain has made 275 appearances and lock Jonathon Stoker who aged 37 played all 24 games this season has 277 appearances. The team are currently led for the second season by flanker Ben Howe who is capped at Wales U16 and U18 levels. 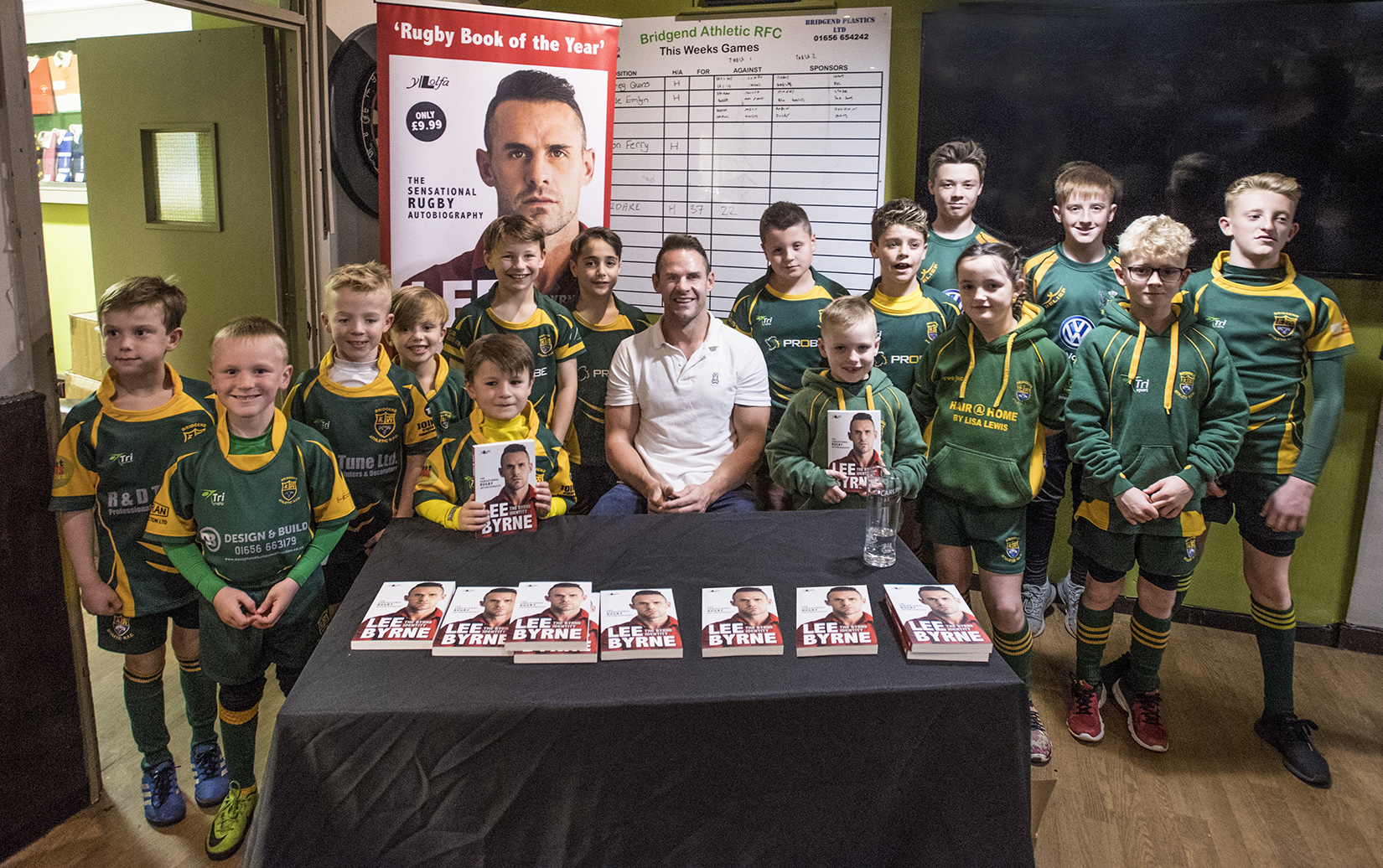 The club 2nd XV finished the season as champions of Tier 2 of an inaugural WRU Conference league set up for sides whose 1st XV’s compete in the top three tiers of the National leagues. They are numerous winners of the Mid Glamorgan District League and Cup competitions. Current Team Player Manager Liam Griffiths broke his father Tony’s 2nd XV 216 match appearance record during the season.

The Youth team are the only side to field two teams in the Ospreys Youth Leagues. The Youth 1st this season retained the Ospreys A league title they won last season and in all on 6 occasions. Last season, representing the Ospreys they won the National Youth League play offs against the other Regional Welsh championship winners and reached the final this season unfortunately losing out against the Blues champions Pontypridd. They are coached by head coach Lee Grabham with assistance from Kevin Gamble, Keith Hobby, Paul Obbard and Mike Groom. Previously in 2007 and 2009 they won the Webb Ellis Welsh Youth Cup, completing a double cup and league triumph in 2009.

Club Tours include visits to Hawaii, California, Canada and Japan.

Significant on-going contributions to the running of the club over the past 30 years include first M&J Secretary and Club Secretary and WRU and District Representative Roy Huntley, Treasurer and former Chairman Terry Coles, Sponsorship Manager David Davison the first youth secretary in 1976 and a former trustee, David Burt former treasurer, trustee and founder of the 100 Club in 1995 which has raised over £15,000 for all club teams, Adrian Burt Press Officer and former Website Administrator and David Perry former player, treasurer, current long term sponsor and currently web site administrator.

The committee are represented by M&J, Youth team and senior playing members. New Chairman Andrew Tellem a former player is an enthusiastic worker, with Jannean Obbard administrating the club bar and player Lewis Down running the club’s Facebook page. Apologies to many other players, coaches, administrators; there are too many to mention who have all played a major role in developing BARFC. 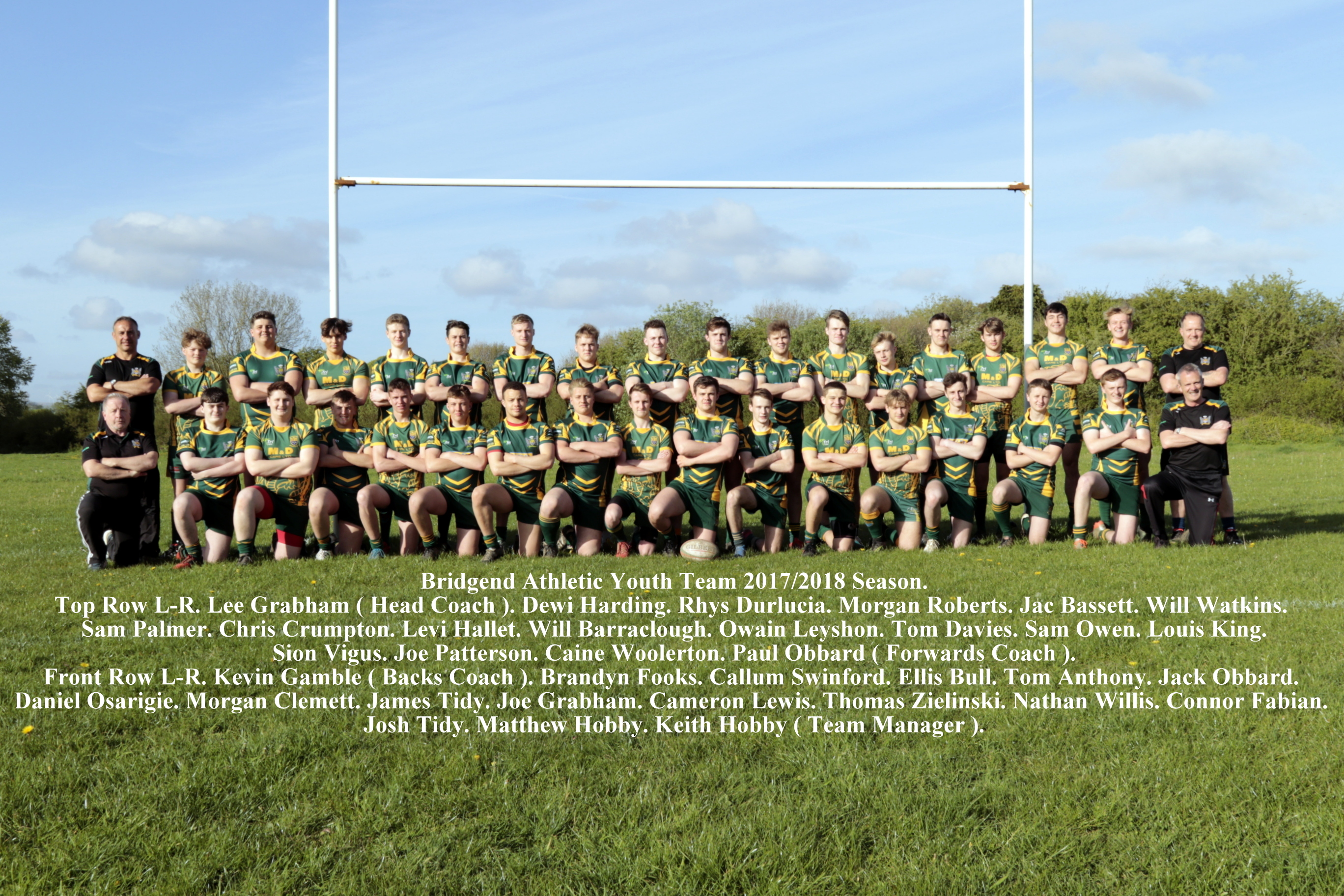 The family orientated club are grateful to past and present sponsors, committees, supporters including current 90-year-old Glan Hitchins and other club assistants without who it would be virtually impossible to run fourteen M&J, Youth and Senior teams providing rugby for around 350 local players aged 7 – 38.